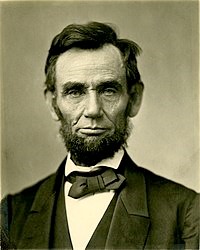 Looking to the west for efficient growth Russia observed President Lincoln’s actions.
The Republican Congress had passed many major laws that reshaped the nation’s economy, financial system, tax system, land system, and higher education system. These included: the Morrill tariff, the Homestead Act, the Pacific Railroad Act, and the National Banking Act. This plan of reshaping the nation’s economy was called the American System. It was advanced by the Whig Party and a number of leading politicians including Henry Clay, John C. Calhoun and John Quincy Adams. The System was also a new form of federalism that included that the state supported high tariff to protect American industries and generate revenue for the federal government. The industry was also protected through selective high tariffs for creating physical infrastructure. Support for protectionism and opposition to free trade were created, particularly for the protection of “infant industries” for those who were facing import competition from abroad. A financial infrastructure was created, where government sponsored national bank to issue currency and encourage commerce. This involved the use of sovereign powers for the regulation of credit to encourage the development of internal economy, and to deter speculation. The First Bank and, Second Bank of the United States were established, and a National Banking Act. Crucially, government made investments in infrastructure creating targeted internal improvements especially in transportation. Improvement of internal traffic-ways was designed to knit the nation together. The North American Land-Bridge was also world’s first transcontinental railroad which was built between 1863 and 1869 to join the eastern and western halves of the United States. Its construction was considered to be one of the greatest American technological feats of the 19th century. The “Pacific Railroad” when opened was as a vital link for trade, commerce and travel. It opened an enormous regions of the North American heartland for settlement.